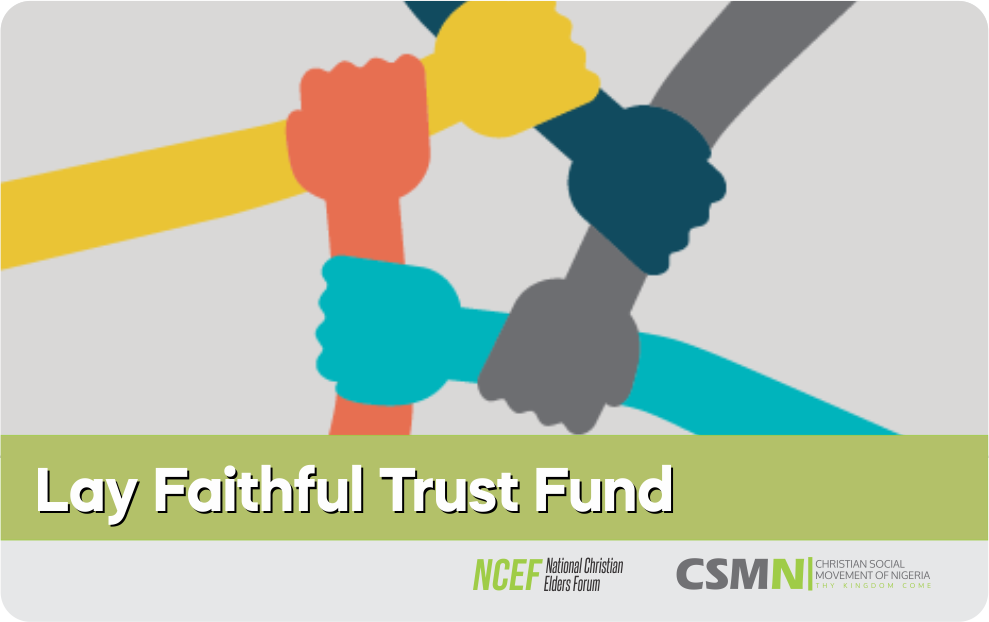 WHAT IS LAY FAITHFUL TRUST FUND?

The LAY FAITHFUL TRUST FUND is Christian fund raising platform initiated by National Christian Elders Forum (NCEF) to be operated by Christian Social Movement of Nigeria (CSMN), the registered arm of Nigerian Church responsible for Christian socio-political issues. After considering the trend of events in Nigeria and the unrelenting ruthless assault by Islamic Jihadists against Christians, NCEF came to the conclusion that it is imperative that funding should be mobilized to defend and protect Christians as well as drive various Christian advocacies and interventions to stem the tide of the genocide going on in the Middle Belt.

During its meeting of Thursday, 23rd July, 2020, after considering a Memorandum prepared by its Secretary on the establishment of a Trust Fund, NCEF passed a resolution calling on CSMN as the socio-political arm of the Church to revive the Christian Trust Fund in the collective interest of all Nigerian Christians.

HOW IS THE LAY FAITHFUL TRUST FUND GOING TO OPERATE?

The Trust Fund will operate by requesting donations of minimum N500 from each Nigerian Christian. It is believed that this amount would not be a burden to any single individual to donate in a month neither would it affect financial commitment of Christians to their Denominations or local assemblies.

The projection is that if many Christians contribute, the sum total will be substantial to undertake credible and effective Christian intervention to defend Christians and promote Christianity in Nigeria.

WHAT IS THE ASSURANCE THAT THE FUNDS CONTRIBUTED WOULD BE WELL MANAGED?

A Board of Trustees, made up of competent and reputable Christian technocrats would manage the Fund. These are Christian individuals who have established personal reputation for themselves and would not stain it by involving themselves in any shady or corrupt endeavor.

Besides, the Trust Fund would maintain the policy of accountability and transparency of Christian Social Movement of Nigeria which is the only Christian body in Nigeria that dutifully publishes every month the names of all its donors as well as the statement of expenditure.

Every Nigerian Christian who can afford to give minimum N500 to a Christian central purse is expected to donate. This donation can be monthly, quarterly or annually according to individual preference and ability.

ARE ALL CHRISTIANS EXPECTED TO CONTRIBUTE?

The Lay Faithful Trust Fund is open to every Christian irrespective of Denomination or Ministry. The operating platform, Christian Social Movement of Nigeria is the socio-political arm of the Church established in 2001 just like CAN was established in 1976 as the Association of Christians.

TALKING ABOUT CAN, WHAT HAPPENED TO THE CAN TRUST FUND?

The CAN Trust Fund was the initiative of Bosun Emmanuel which he took to CAN in 2014. It was well received and promoted by the former President of CAN, Pastor Ayo Oritsejafor, who saw its potential to help Christianity in Nigeria respond to impending danger which is now fully manifest.

As it would turn out the succeeding Administration in CAN did not handle the project well and it was left comatose from 2018 – 2020. After waiting for two years and there was no indication that CAN was prepared to resolve the crisis it created, NCEF proceeded to launch a fresh Trust Fund in the collective interest of Nigerian Christians.

NCEF took this decision based on the realization that if there is no central purse to fund Christian advocacy and intervention, Christianity in Nigeria, and Christians in particular, shall suffer immense damages that would make the current distress look elementary. Consequently, on 25th July, 2020, NCEF wrote to the President of CAN as well as to the Heads of the five Blocs of CAN informing them of its intention to retrieve the Trust Fund and operate it under the socio-political arm of the Church since it was clear that CAN was not interested in operating it for the collective interest of Nigerian Christians.

HOW ABOUT THE MONEY THAT CHRISTIANS CONTRIBUTED TO CAN TRUST FUND?

The money contributed is safe in the accounts of the CAN Trust Fund. Under Pastor Oritsejafor, the Board of Trustees set up a check and balance financial management that ensured that funds contributed would not be mismanaged. Whenever the issues on the ground are resolved by CAN, the money shall be retrieved and used for the purpose for which it was contributed.

WHY WAS IT NECESSARY TO LAUNCH A NEW TRUST FUND? COULD NOT ISSUES IN THE CHURCH BE RESOLVED?

NCEF made many attempts to help CAN resolve critical leadership issues in the Church but all the attempts were rebuffed. After waiting for two years and the intensity of the genocide was escalating, NCEF concluded on proactive step to save the lives of Christians and preserve Christianity for future generations in Nigeria.

It is hoped that Christian leaders would respond to Godly counsel and resolve the manifold crisis in the Church with truth and the fear of God.

WHAT ASSURANCE IS ON GROUND THAT THIS SAME ATTEMPT WOULD NOT BE FRUSTRATED?

As much as it depends on both NCEF and CSMN, the project shall be managed in the fear of God with honesty and integrity.

As Christians, we can only pray that after witnessing the horrors of Christians hacked to death in the North, Middle Belt, as well as in other parts of the country, no one would seek to undertake any step to frustrate this renewed project. That would be tantamount to declaration of open hostility against Jesus Christ.

WHAT IS THE ASSURANCE THAT THE TRUSTEES WOULD STILL BE WILLING TO PARTICIPATE GIVEN THEIR PREVIOUS EXPERIENCE?

Apart from being successful technocrats, the Trustees are also well seasoned disciples of Jesus Christ. Their commitment to the Lord is the assurance that they will not be discouraged and pull out of managing the Trust Fund. Like Isaac in the Bible, they will continue digging new wells even if the enemies insist of filling them with earth. With perseverance, we shall all reach Rehoboth.

WHAT IS THE MONEY GOING TO BE USED FOR?

HOW DO YOU PLAN TO APPLY THE FUNDS?

Before now, CSMN has established a Financial Policy for all the donations that it receives. The donations into the LAY FAITHFUL TRUST FUND shall be applied as follows:

CSMN HAS BEEN RAISING FUNDS UNDER “CRY OF MARTYRS”. HOW DO YOU RECONCILE THIS?

CSMN operates a single account into which all donations go. Whatever is donated to CSMN will be applied along this Financial Policy.

WHAT IF SOMEONE WISHES TO DONATE ONLY TO PERSECUTED CHRISTIANS?

The donor has the right to dictate the specific area he wants his/her donation to be applied, if he/she so wishes. If any donor so determines, and provides sufficient funds for the project, CSMN shall comply with the wish.

THIS IS NIGERIA – HOW ABOUT THE NIGERIAN FACTOR?

We have to come a point in which some of us must prove that not all Nigerians are evil, greedy and corrupt. We still have good people in this country and amazingly, they are in the majority.

The managers of the LAY FAITHFUL TRUST FUND are determined to set forth a new standard of corporate accountability and honesty in managing public funds.

Besides, there shall be regular audit of the accounts and the Audit Report shall be made public. CSMN already publishes monthly report of all its donors as well as all its expenses every month.

WHAT IF SOME CHURCH LEADERS REFUSE TO SUPPORT?

It is hoped that there would none of such Church leaders. The handwriting on the wall is clear. We are all in mortal danger.

However, if any Church leader refuses to support, it would not stop the Lord from accomplishing His purpose. We can only hope that there would be none of such.

HOW CAN INDIVIDUAL CHRISTIANS ASSIST?

HOW ELSE CAN ONE PARTICIPATE?

Christians can volunteer to serve in any area of these areas:

WHAT ARE THE CONTACTS OF CSMN?

If you do not have the answer you require readily available, you can post new questions here.