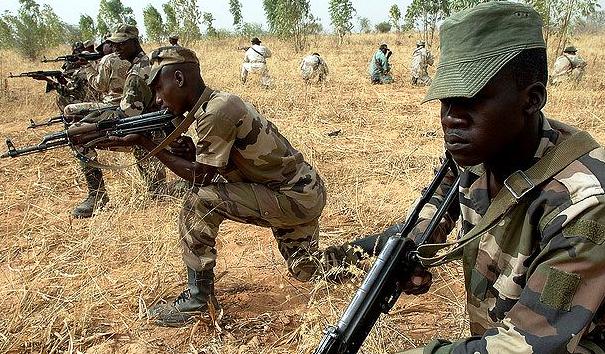 PRELIMINARY REPORT ON EXECUTION OF THE MILITARY

Gentlemen of the Press,

I welcome you to the presentation of our preliminary report.

You will recall that on 24th day of February 2018, we the representatives of Human Rights Groups in this country addressed you here in Makurdi and informed you that we would be embarking on daily monitoring of exercise Ayem a Kpatuma by the Nigerian Army. This public presentation is therefore a preliminary report of our observations, findings and recommendations regarding operations of the Army in Benue State as they affect the herdsmen attacks on the people.

The Military exercise codenamed AYEM AKPATUMA (Cat race) came into existence following an invasion of Benue State by armed Fulani herdsmen on December 31, 2017 and 1st of January, 2018 which claimed over 80 lives and sacked so many communities with property worth millions of naira destroyed in Guma and Logo local government areas of the state.

With the launch of Exercise Ayem A Kpatuma by the Military, it therefore became necessary to carry out an independent assessment of the Military operations to determine whether or not they adhere to the rules of engagement while ensuring the restoration of peace to the affected communities.

At the lunch of operation AYEM A KPATUMA (Cat race), attacks on communities by Fulani herdsmen have increased in the period between January and March. The key issues in these regard are:-

1. TORCHING OF HOUSES: Burning of houses has continued unabated even with the arrival of the military. Our team of monitors found out that the Military are not arresting or attempting to disarm the herdsmen who are perpetrating these acts of mass destruction on Benue Communities.

2. KILLINGS: The Team noticed that killings have continued unabated since the mass burial on the 11th of January 2018.
From our findings, over 90 people have silently been killed in parts of Benue State since January 11. Our team was on the field from 3rd of March and confirmed killings in Mbalagh Ward of Makurdi Local Government Area.

3. LOOTING: There has been massive looting on Benue communities by herdsmen. Indigenes of the affected areas have fled their homes for fear of attacks. The team noticed that the armed Fulani herdsmen have occupied homes of Benue people whom they have chased out of their homes.

4. ETHNIC CLEANSING: The attack on Benue Communities by herdsmen could only be equated to ethnic cleansing as incessant attacks and killing of both children and women have become frequent stretching from Agatu, Guma, Makurdi, Gwer, Gwer-West, Logo, Buruku, Kwande and now Okpokwu as well as many other Local Government Areas of the State. We have observed a familiar pattern of attacks by the herdsmen. They come in the night, strike their defenceless targets killing many and withdraw so that anyone who attempts to go after them would be arrested as the aggressor.

The interviewers were used content analysis and review of media reportage of crimes and attacks before and during the lunch of EXERCISE AYEM A KPATUMA. The preliminary result of the painstaking mission is contained in our findings as follows:

1. Operation AYEM A KPATUMA (Cat Race) has enhanced the movement of more Fulani herdsmen with thousands of cows into Benue State. The herdsmen who had left the state for other parts of the country following the enactment of the Open Grazing Prohibition and Ranches Establishment Law have suddenly found the courage to invade the state in droves.

2. More Communities, have been destroyed. A community in Makurdi North, Mbalagh Ward to be specific has been sacked completely and 5,000 people displaced under the supervision of the Military. Fulani cows have been feeding on yams and crops in the area.

3. In the Southern part of Makurdi, Fulani cows still graze openly without any arrest made by Military or the Police.

4. Cows sighted in Makurdi Local Government Area within the period of this interim report were over one thousand.

1 Our team found out that resident Fulanis are the ones who invite their kinsmen elsewhere to come to Benue and violate the ranching law.

2. On the 3rd of March, 2018, Fulanis still burnt down a village in Ukpiam. No military personnel were sighted in the village as the rampaging herdsmen launched their attack.

3. Still in Guma, our sources saw Fulanis with cows in hundreds occupying Utsaha village boasting that they were invited to come to Benue, alleging that the Military are in the state to suspend the Open Grazing Prohibition and Ranches Establishment Law.

4. Semaka village was also burnt down in Guma with the entire village sacked and many fleeing members of the community sustained injuries of varying degrees.

1. We saw more than 1,000 cows grazing openly with impunity as indigenes of the area watched helplessly.

2. Residents of Agatu are already fleeing for fear of attack by the herdsmen as they move into the communities in large numbers on a daily basis.

3. No meaningful presence of the military or any other security agency is in Agatu at the moment.

1. Ukemberabya Ward has been completely taken over by Fulani herdsmen and homes occupied with cattle feeding fat on yams and other farm crops.

2. Mbagber Ward has also witnessed attacks with two people killed and many others injured. We find the hesitance of the Military to arrest or disarm the perpetrators quite disturbing.

3. The number of cattle and Fulani herders sighted in Logo was confirmed by villagers as a result of Military presence which they believe has encouraged the herdsmen to graze indiscriminately and attack innocent people.

On the 5th of February, armed herdsmen attacked Omusu community of Okpokwu LGA killing 24 people and injuring many. Nearly half of the community was burnt by the invaders. This latest attack has made a mess of Exercise Ayem A Kpatuma and the state Police command as no arrest has been made more than 48 hours after the sad incident.

1. EXERCISE AYEM A KPATUMA (Cat Race) is causing more harm than good to Benue communities. Rather than bringing peace and move people back to their ancestral homes, the Military have been encouraging more Fulani herdsmen to move into Benue communities.

2. The Military encouraged Fulani herdsmen with a handbill which they used at the launch of AYEM A KPATUMA. They circulated the handbill misinforming the general public and giving a perspective that was not true.

1. AYEM A KPATUMA should reassess its operations and sincerely help Benue to enforce the open grazing prohibition law 2017.

2. Security agencies should as a matter of necessity, help the Benue State Government to implement the Open Grazing prohibition and Ranches Establishment Law as, in our assessment, the legislation is the only sure way to peace and security.

3. The Military should withdraw the said handbill and tender apology to Benue people for trust and confidence to be restored.

5. Fulani herdsmen should be declared a terrorist group and treated as such by Nigeria.