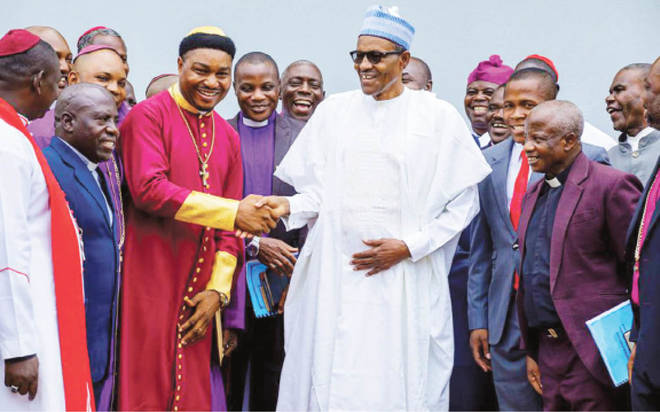 On Thursday, April 5, 2018 on NTA news at 9pm, President Buhari made a veiled reference to NCEF in his speech when a group of persons purporting to be Arewa Pastors’ Non-Denominational Initiative for Peace in Nigeria led by one Bishop John Abu Richards, who seem to be an intelligence officer with the pseudonym John Abu Richards at Aso Rock Presidential Villa, Abuja.  This group portends danger to all Christians in Nigeria especially when these impostors want the President to link them with the security agencies.

The Sun news quoted them as saying “we demand His Excellency, 1. That you support our 5,009 Arewa pastors peace and unity National Delegate Prayer Congress at the Eagle Square on Thursday, 26th April 2018. We will want His Excellency to link us with the relevant security agencies in our crusade for peace and fight against hate speeches and those dark walls that separate us as we will network with our counterparts from the East and West to hand over those of our colleagues being used by the enemies of our togetherness to inject confusion and false stories into the public space resulting to the destabilization of peaceful co-existence we were enjoying in the country.”

This request shows clearly that these people are not Christians much less pastors.  When a child of 15 years, Leah Sharibu can defy death, they are asking for security protection.  The NCEF cannot but agree with Segun Gbadegesin who wrote in his column in The Nation Friday, April 6, 2018, titled Leah’s Stand thus: “having accepted Christ as her personal savior, Leah had closed her eyes to all manners of pleasure and comfort that might come with the denial and betrayal of her savior. Sticking to that position is a moral commitment. It comes with moral maturity, a rarity for girls or boys her age.”  Here we are with a group of impostors claiming to be Christians who believe that the President has no Islamization agenda because he (the President), has a Christian Vice-President.  The impostors continued “this is just an opposition propaganda, about the killings around the Country, we observed that it is not only Christian that are the victims, both Muslims and Christians are affected, and the Government is doing everything possible to solve the problem.” This statement portrays ignorance of the meaning of jihad.  Muslims killed in jihads are martyrs while Christians and non-Islamists including traditional worshippers are the victims of conventional jihads.  It is stealth jihad by Islamists in the establishment who have assembled impostors posing as Christian Pastors to promote political Islam by discrediting responsible Nigerians in their defense of Democracy and Rule of Law.

This explains why no Christian should speak in defense of Islamism or political Islamism because of extreme ignorance on the subject.  It is clear that this body of impostors of Christianity wants protection in their crusade against Democracy in the promotion of Sharia in Nigeria. The same security that did not protect Leah Sharibu, now must protect them against Sharibu’s religion.  In the face of the above fact, CAN is being gradually replaced by impostors before the present Administration.