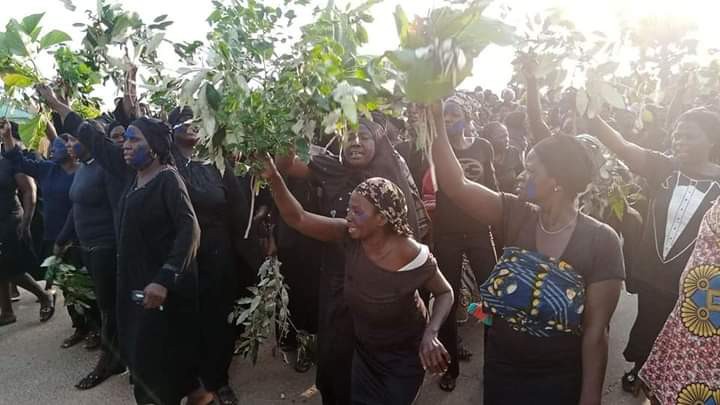 The meeting held on ZOOM was well attended by Christians both home in Nigeria  and in the Diaspora. The platform attendance was oversubscribed such that many interested participants were denied access at cutoff. This was an indication of the Christian community’s great concern about the killings going on in Southern Kaduna.

RESOLUTIONS OF THE MEETING OF CHRISTIAN BRETHREN HELD ON SUNDAY 9TH AUGUST, 2020 ON ZOOM ONLINE PLATFORM ON THE KILLINGS OF CHRISTIANS IN SOUTHERN KADUNA AND IN THE MIDDLE BELT OF NIGERIA

TITLE OF MEETING: VOICE OF THE PERSECUTED

TOPIC: THE SOUTHERN KADUNA KILLINGS AND THE BLAME GAME: WHAT IS THE TRUTH?

The meeting held on ZOOM was well attended by Christians both home in Nigeria  and in the Diaspora. The platform attendance was oversubscribed such that many interested participants were denied access at cutoff. This was an indication of the Christian community’s great concern about the killings going on in Southern Kaduna.

The discussions were robust and very intense and there was palpable emotion. At the end of the deliberations, the following resolutions were adopted:

1.      That the Federal Government and the Kaduna State Government be held responsible for the murder of Christians of the indigenous ethnic nationalities in Kaduna State. The meeting specifically identified the Governor of Kaduna State, Mallam Nasir El Rufai as derelict in his primary duty of protecting the lives of citizens of his State.

2.      That that the scale and pattern of the killings is tantamount to genocide no less than the dastardly occurrence in Darfur, Sudan.

3.      That, if as had been widely reported in the media, a notable Christian Pastor was among the major sponsors and backers of Governor El Rufai whose first-term election  he purportedly bankrolled with a personal donation of N160 million, the said Pastor must be held to vicarious liability for these killings of his fellow Christians and in that light, he and others like him must speak up and speak out now or never.

4.      That Christian leaders who aided, abetted or facilitated the election of the present Federal Administration be called out to openly denounce the anti-Christian policies of the administration and lead an open repentance for their actions and inactions or be held complicit in the general persecution of Christians and the wide-scale murder of innocent citizens all over the country, particularly in the North.

5.      That a series of lawsuits be rightly and urgently commenced against the Government of Kaduna State and the Federal Government of Nigeria for their inexcusable failure to stem the violent attacks and murders of innocent citizens.

6.      That Christian legislators be called upon to stage unified protests at the National Assembly against these killings to compel the Federal and State Governments to take necessary action against the murderers.

7.      That Christian constituencies be made to engage with and compel their legislators to move the National Assembly to drastic measures against the murderers as well as the state and federal Governments that appear to condone their murderous activities.

8.      That massive country-wide Christian protests be embarked upon in protest against the perpetrators of these conscienceless killings that appear to be a nation-wide agenda by an ethnic militia.

9.      That Christian brethren in their individual and group capacities, commence writing open letters of protest to both President Buhari and Governor El Rufai of Kaduna State.

10.  That Christians both home and abroad join the Christian Social Movement of Nigeria and participate in the activities of the Movement by first registering on the website at www.csmnigeria.org to help defend, uphold, promote and advance the Christian faith as well as democracy in Nigeria.

11.  That the imperative of sustained prayers and spiritual warfare be constantly and consistently kept in mind in all we do as Christians to bring this genocidal devilry to the quickest end. To that end, every Christian is welcome to join the 24/7 Prayer Platform of CSMN to pray for 30 minutes every week in the prayer chain.

12.  That Christians, and indeed all Nigerians, be implored to arise and save the country, it being noted that the solution to the present crisis must be homegrown as foreign nations are all battling their own internal issues and challenges.

13.  That Christian youths and elders rise to constructive use of Social Media to publicize and engage these issues. That, in particular, Social Influencers on Social Media be prevailed upon to support these engagements and save innocent lives.

14.  That in so far as funding is critical to sustaining effective Christian response to the ongoing genocide and general persecution of Christians in Nigeria and also for the sustenance of Christian advocacy in line with the goals and objectives of CSMN, all Christians should support and contribute to the LAY FAITHFUL TRUST FUND. (For details, please see www.csmnigeria.org)

15.  That all Christians should please endeavour to participate in the United Nations approved INTERNATIONAL DAY OF RELIGIOUS FREEDOM taking place on Saturday 22nd August, 2020 on ZOOM which will feature various speakers of country and international repute. Details are available at www.csmnigeria.org

In conclusion, the meeting agreed that the Conversation of Conscience, VOICE OF THE PERSECUTED, shall be sustained and for now, it shall be held fortnightly.