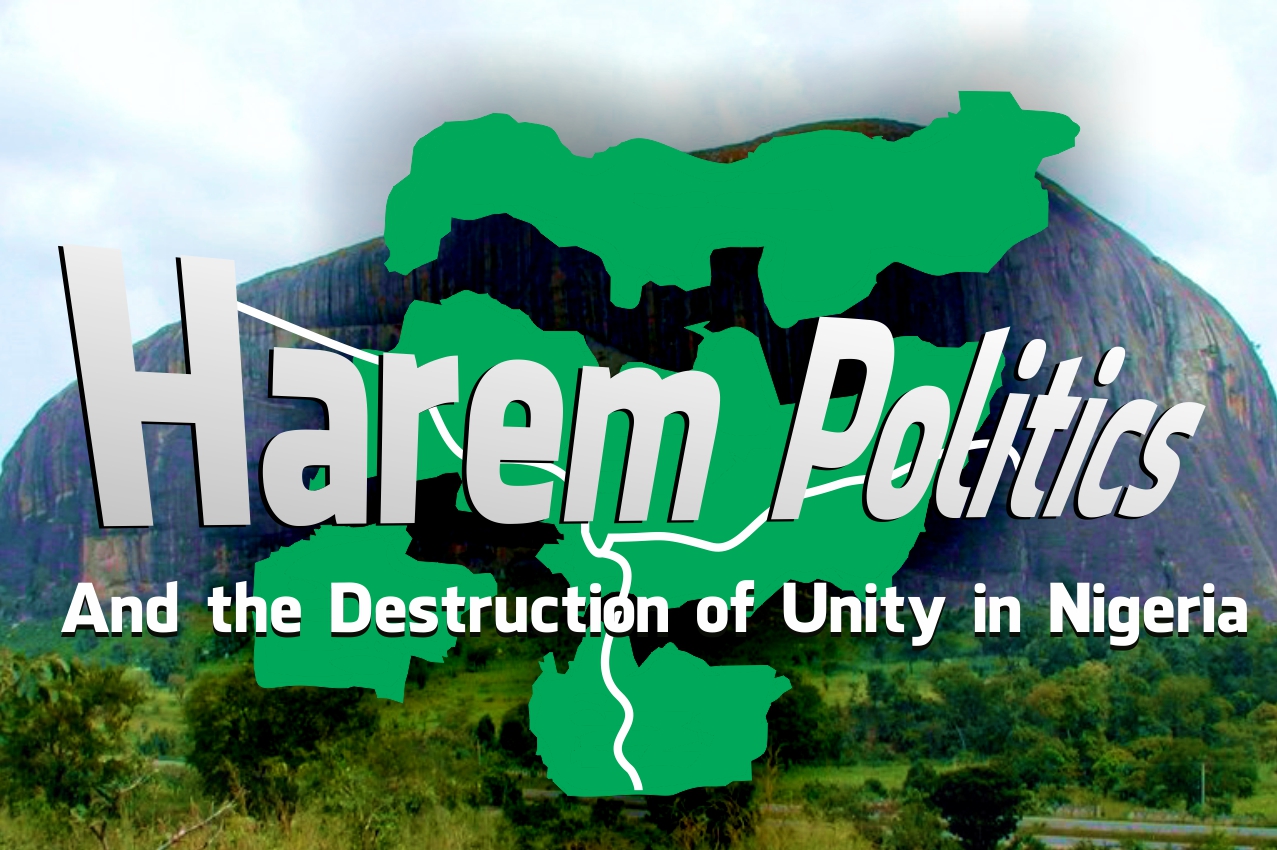 At a Colonial Service Dinner in 1913, Lord Harcourt, the then Secretary of State of the Colonies, (after whom Port Harcourt was named) summarized in a humorous metaphor, the dependence of Northern Nigeria on the British Treasury for sustenance, when he said:

“We have released Northern Nigeria from the leading strings of the Treasury. The promising and well-conducted youth is now on an allowance “on his own” and is about to effect an alliance with a Southern Lady of means. I have issued the special license and Sir Frederick Lugard will perform the ceremony.  May the union be fruitful and the couple constant!  The Nigerians are not designed to be a great “Trust” but a great “Federation”. (Ref. LAGOS the Original Lady of Means, Solomon Asemota SAN, www.csmnigeria.org)

For as long as the Yorubas and the Ibos remain mutually suspicious and envious of each other, the “well-conducted youth” of the North will continue to manipulate and exploit them. Whenever it suited the “harem politics” of the North, it would strike alliance with the wife in the East and ignore the wife in the West. It was not a hidden game. Even the Owelle of Onitsha, Dr. Azikiwe referred to himself as the “bride”, in the 1979 politics, waiting for a suitable suitor. The West (the other wife) could not “marry” her since Nigeria does not practice lesbianism, so the bride went to the “well-conducted youth”.

In 2015 elections, the northern polygamist winked at the West and struck alliance with the Yorubas to the chagrin of the East. Now, he is winking at the East promising to return to her bed in 2019. It is nothing but “harem politics”.

WHAT IS THE SOLUTION?

The Ibos and the Yorubas have no option but to lead the other indigenous ethnic nationalities in Nigeria in the drive for unity. It should be pointed out that Nigeria is a nation made up of two races: the Negroes and the Negroids. The Negroes are the indigenous African ethnic nationalities making up the 386 ethnic groups while the Negroids are of Arab descent made up of Hausa, Fulani and Kanuri. Nigeria has an estimated total number of 389 ethnic groups. Only three ethnic groups are primarily responsible for the distress in the nation. It is in those three ethnic Groups that “Boko” is “Haram”.

The Negroid (Arab) race in Nigeria has forged unity on the basis of Islam as a common religion. The indigenous ethnic nationalities have no option but to find a common rallying point as the basis for unity. Fortunately, the indigenous ethnic nationalities have Christian majority in four out of the six geopolitical zones in Nigeria. These are: Niger Delta, South East, Middle Belt and South West.

It should be clear that the objective of such unity is NOT to “Christianize” Nigeria and compel adherents of other religions to change their religion. Rather, the goal of Christian unity in Nigerian politics should be to entrench DEMOCRACY and ensure that JUSTICE, EQUITY and FAIRNESS prevail in the nation. Once DEMOCRACY becomes the indisputable national ideology and the Constitution is affirmed as the only source of legislation, Nigerians are free to practice whatever religion suits them.

Once the Ibos and the Yoruba agree to unite in subsequent elections and negotiations for power, it becomes easy for Middle Belt to join them and the Niger Delta will also come on board. By now, it should be clear to everyone that the Islamists of the North do not have any good intention for the indigenous ethnic nationalities in Nigeria. Therefore, it is in the common interest of the 386 indigenous ethnic nationalities of the Negro race in Nigeria to unite, using the Godly doctrines of forgiveness and mutual respect as the basis for unity.

Under the British, the Islamists of the North learnt the art of DAR, “divide and rule”. When the British left, the North went all out and struck alliance with the Arabs from whom they adopted DAD, “divide and destroy”. The Islamists of the North have adopted the brutal, deceitful, and destructive culture of the Arab race. The Arabs are a brutal and terribly destructive race. There are scarcely any of the indigenous ethnic nationalities that have not tasted of the cruelty, wickedness, treachery, intolerance and discrimination of the Islamists of northern Nigeria.

The indigenous ethnic nationalities should not be oblivious of the mindset of the rampaging Islamists. They have adopted the mindset of the Arabs. To the Arabs, the indigenous African is a slave. This would explain the mindset behind the massacre of black Africans in Sudan, Libya, Egypt, as well as the practice of slavery that is still prevalent in Mauritania. The Arabs use the same word in Arabic for “slave” and “black African”. It is the Arabic word, “abeed”. During an interview in Morocco in 1996, Osama Bin Laden said, “… Which is why whenever an Arab sees a black African, what he sees is a slave”. In 1962, the Sudanese General Hassan Beshir Nasr said, “We don’t want these black slaves … what we want is their land.” (Arabs Mortal hatred and enslavement of the Black Race – Naiwu Osahon)

This is the mindset of the Islamists in northern Nigeria. This is the reason why Grazing Reserve is pursued with violence, genocide, intimidation and deception. The Negroid race (Fulani, Hausa and Kanuri) in Nigeria sees themselves as superior to the indigenous African ethnic nationalities. This is the reason for the “born to rule mentality”. The only solution is for the 386 indigenous ethnic nationalities in Nigeria to forge unbreakable unity to resist the “fellow citizens” who have turned themselves into cruel and unjust colonialists.

The Islamists of the North used Islamic religion as the unifying force and the basis to contest for power in Nigeria and through it brought destruction, division, economic recession, bloodshed and other unprintable evils upon Nigeria. Christians, primarily, of the 386 indigenous ethnic nationalities should use Christianity as the basis for unity to bring justice, equality, fairness, progress, peace, restoration, reconciliation, and economic development to the nation. As stated earlier, the objective is not to “Christianize” the nation, but to strengthen DEMOCRACY. Under democracy, every citizen is guaranteed equal right.

After experiencing the murderous Boko Haram, the devastating and destructive Fulani Herdsmen, and the sectional, divisive and discriminatory administration of President Muhammadu Buhari, it would be an everlasting shame for Christians in Nigeria if they cannot find the basis for national unity in the Word of God to resist and overcome the evil that has been unleashed on the country. The good that should come out of the present distress is that Christians in Nigeria surmounted ethnic bias and prejudice to rally together under the universal banner of Christ to unite and defeat evil in Nigeria. What is going on in Nigeria under the present dispensation is evil, pure and unadulterated evil; it must be defeated with good.

This is the reason why we are asking you to join the Christian Social Movement and encourage other Christians too, to join. The prayer of Christ in John 17: 21, “that they all may be one” must be answered in our nation. At a Christian program recently, a sister commented that of all the prayers of Jesus Christ, this is the only prayer that God is yet to answer. Please join us to affirm that in Nigeria, this prayer shall be answered. We, the people of God, in Nigeria, we shall be one. We have no other option; our lives and the survival of our descendants depend on it.